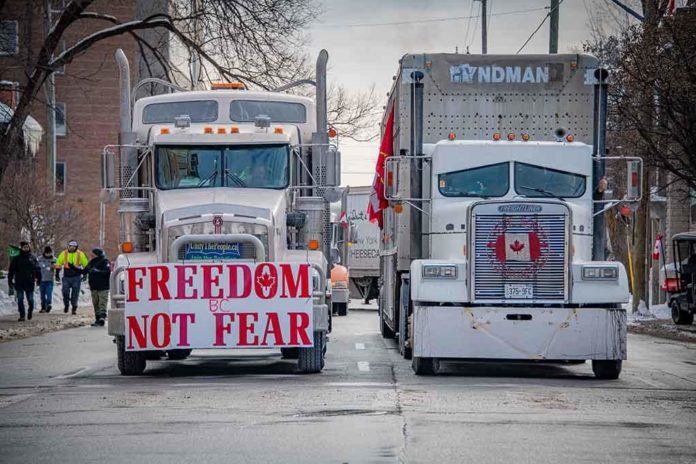 (DailyFix.org) – In Ottawa, a convoy of truckers decided to protest Prime Minister Justin Trudeau’s COVID-19 mitigation orders. The truckers don’t believe it’s right for the government to force them to vaccinate and wear masks or face punitive measures if they don’t comply, including but not limited to revocation of their licenses and ability to provide for their families.

Instead of taking it lying down, the truckers invoked their right to protest and shut down the supply chain of goods and services into, out of, and across the country.

The truckers continue to stand their ground, and their US colleagues are supporting them. Some say the government doesn’t respect the truckers’ role in providing goods to the public and call the prime minister’s actions dictatorial. Now, as the situation unfolds, it appears it’s creating some unusual bedfellows.

For weeks, millions of people donated to help the truckers offset their lost revenues while protesting Canada’s harsh COVID-19 mitigation orders. GoFundMe shut down over $10 million in donations to the truckers. In the days that followed, people moved to GiveSendGo, donating over $9.5 million.

On Wednesday, February 16, the company said its website was hacked. The hackers didn’t steal credit card information or money, but the firm shut down the website over the weekend to conduct security audits. On Tuesday, the platform was back up and running to allow people to continue donating to the truckers’ cause.

After the hack, the media began sharing the names, zip codes, and donation amounts of donors to the cause. The Washington Post even ran a lengthy article exposing the biggest donor and a map showing where donations came from across the United States. Another Post reporter attempted to contact voters to ask what motivated their contributions. Other media outlets in the US and Canada published the details after international hacker Aubrey Cottle took credit for the breach and disseminated people’s information online. He said he would do it again if the donations kept pouring in.

One would expect Conservative politicians, activists, and groups to condemn this behavior. Surprisingly, far-left Squad member Rep. Ilhan Omar (D-MN) joined her longtime Conservative critics in blasting the press. She defended the donors’ right to privacy.

Omar said the public disclosures in the media would lead to harassment of citizens after threats forced a cafe owner to shut down her business. The far-left politician tweeted, saying she couldn’t understand the media’s reasoning for reporting the shop owner’s gift and suggested the media wanted to see people harassed. She added the media’s irresponsible actions were immoral, and they needed to do better. In a separate post, Omar stated media stories releasing private citizens’ information ruin people’s lives and are unnecessary.

So, strange bedfellows can create occasional alliances after all.